A fabulous “Best of Both Worlds” workshop

Several of us from the A.R.T. trekked down to the big apple yesterday for the presentation at the end of a one-week workshop kindly hosted by the folks at The Public Theater.  The cast – which all of us present hope will be the one that will come to Cambridge – was assembled in front of their scores, with a pianist and a conductor.  Diane made a brief speech, and the music began…. and WHAT a ride it was!  The cast was phenomenal, voices ranging from the big handsome Philip Boykin singing the role of the King with the deepest bass baritone voice to the absolutely adorable 12-year old Chris Borger, who not only sounds like an angel, but performed with the poise and the self-assurance of a total pro.  And the amazing Lavon Fisher-Wilson, who brought the house down with her “let a little sunshine in”…. we were practically dancing in the aisles.  And… last but not least, there was “Big Daddy” himself, David Alan Grier, a sort of master of ceremonies, story teller, who tied all the proceedings together with a great sense of humor and improvisation.  I was not familiar with the music of composer Deirdre Murray, but I could not sit still, totally enveloped in the rhythm, the buoyancy and enthusiasm of the cast, and those voices!!!! I cant wait for rehearsals to begin here in Cambridge in the fall… 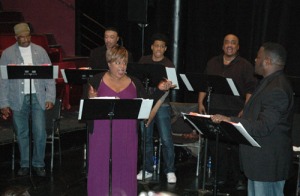 This entry was posted on Thursday, June 18th, 2009 at 4:42 pm and is filed under 09/10 Season, Kati Mitchell. You can follow any responses to this entry through the RSS 2.0 feed. Both comments and pings are currently closed.

3 Responses to A fabulous “Best of Both Worlds” workshop