i’d like to try and make the energy arrows in some way… a path that is revealed at least to donnie, probably cherita senses it, grandma death knows about it, frank is responsible in part for it – marcus

the mailbox is important, I think it’s a delivering device for donnie, as well as a transporting device for grandma death. i like your mention of a love affair and an obsession, her checking every day for that letter that never comes…and then she gets that letter at the very end, and it’s from donnie, and we hear his voice over – marcus

AN OFFICE – JUDGMENT, HEIGHT, A MEETING HALL, A PLACE TO PASS SENTENCE, A MAGNIFIED VOICE, A DISTORTED APPEARANCE, LARGER THAN LIFE, OMINOUS – MATT

not sure what office? school… schools seems ineffectual, it doesn’t understand, it can’t handle what’s happening, it’s limiting except for those few people like monnitoff and the teacher that drew barrymore plays. they understand even though the rest of the school doesn’t understand. – marcus

A CELLAR DOOR – AN IMPOSSIBLE JUMP – JUST OUT OF REACH – MATT

i’d like to do the cellar door, we never had one. it’d be nice if it were powerful in some way, and calling to him before he arrives, maybe a couple times throughout the show, maybe that’s not a good idea, don’t’ know, maybe. – marcus 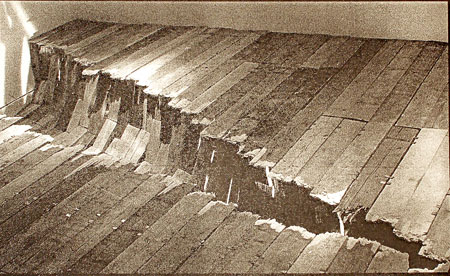 This entry was posted on Wednesday, November 7th, 2007 at 8:00 am and is filed under 07/08 Season, Donnie Darko, Nicholas Peterson. You can follow any responses to this entry through the RSS 2.0 feed. Both comments and pings are currently closed.